Tevez Staying at Man City, Will Nasri Join Him? 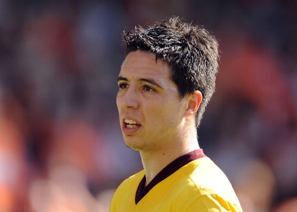 
Carlos Tevez will stay with Manchester City according to Roberto Mancini despite intense speculation the Argentinian forward would be leaving Eastlands this summer. Tevez was being chased by Inter Milan, with Mancini said to be keen on bringing Samuel Eto’o to Manchester as part of the deal, but now the Italian has revealed that the move stuttered because the Serie A side were unwilling to sell Eto’o.

Roberto Mancini said this about the player:

"Yes, of course Tevez will stay, he is a fantastic player... There was talk of an exchange with Eto'o but Inter did not want to sell.”

Tevez had earlier seemed keen on a move after admitting on an Argentinian chat show that he wasn’t enjoying life in the north-west of England – and added that he would not return to Manchester. Here's a bit of what he said: 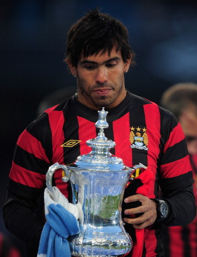 "I don't have any new friends, I am always with my family and lifelong friends. I don't even leave my house. I'm the stay-at-home type... There is nothing to do in Manchester. The problem is I'm still speaking very poor English... When I finish my contract I will not return to Manchester ever - not even on holiday."

While the deal for Tevez and Eto’o appears to be a non-starter, the future of Arsenal’s Samir Nasri still hangs in the balance after Mancini revealed he would be interested in adding him to his squad. When asked if a deal had been done for the former Marseille midfielder, Mancini offered a short but telling answer, saying: “No, not yet.”

Nasri’s future has been the subject of much speculation after he reportedly turned down a new contract to stay with Arsenal worth £90,000 a week. Manchester United were favourites to land the skilful midfielder, but with City playing Champions League football for the first time next season and said to be on the verge of adding even more new players to their squad as they go in search of trophies, there is a good chance Nasri could end up playing in City’s red black away shirt next season.

With just twelve months left on his current deal, Nasri is keen to listen to other clubs as he goes in search of winning trophies; something he has been unable to do at Arsenal. The Gunners have gone six years without a trophy, and Nasri insisted he wasn’t interested in money, but wanted the opportunity to win silverware. Nasri said the following:

"We already earn huge wages, the priority is to make a big career and to win titles … With no titles under your belt, you can't be in the list for the Ballon D'Or. I came to England to get trophies because I haven't won anything in my career. I am hungry for titles. I play football because I love this sport and want to feel the emotion of winning. Lifting a trophy all together, this is the beauty and sense of team sports."

Will Nasri make the move to Manchester City? How would he fit in? What are your thoughts on Arsenal, Manchester City, Tevez, and Nasri? Share them in the comments below!
Posted by NC at 6:53 AM